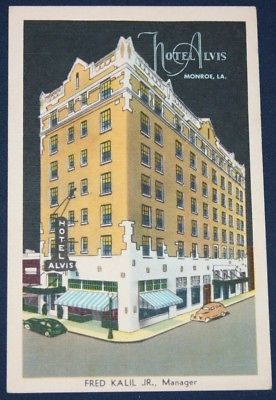 Another lost gem in Monroe is the Hotel Alvis.  it was built in 1928 on the Northwest corner of DeSiard and North 5th Streets.  It was seven stories tall with 125 rooms.  Each room had a bathroom with hot and cold running water.  It opened it’s doors on May 20, 1929.  In the 1960’s it was known as the Motor Inn and in the 1970’s as the Barron Hotel.  It closed in the 1970’s.  In the 1990’s it had sat abandoned for more than twenty years.  Vandals and homeless camped in it and it fell into ruin.  A local charity organization was offered the building to help the needy.  They were blocked by stiff opposition from the city.  In 1998, the building was torn down.  An empty, vacant lot now occupies the site.

Genealogy librarian with 27 years experience in the library field. View all posts by ouachitaparishhistory