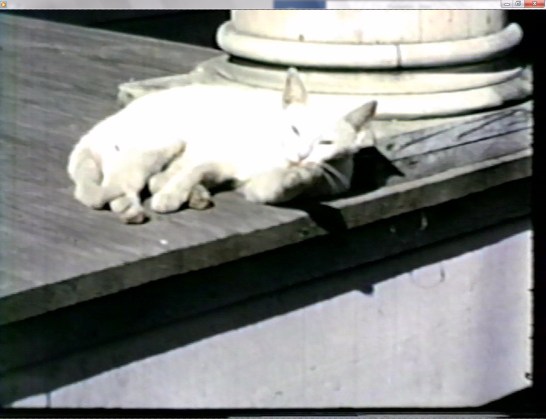 Back in 2012, I wrote the following article about Gardenia the library cat for Louisiana Road Trips Magazine.

In this day and age, when so many are allergic to cats, library cats are a rare sight.  Many years ago, rats were a problem in libraries, so to get rid of the problem, many libraries got a cat.  Ouachita Parish was no exception.

In the early 1950s, Library Director Frances Flanders had a rat problem.  The rats were eating away at the magazine collection.  A library patron named Faith Johnson heard about the problem and gave the library a female kitten.  The little kitten was pure white with “pinkish ears”.  The Librarians fell instantly in love with her.  The newest staff member was dubbed “Gardenia” after a cat in a book one of the Librarians had read.  Gardenia earned her keep.  The rat problem was soon taken care of!

Gardenia grew into a sociable animal.  Patrons who would sit down to do research would most likely soon find a lap full of cat!  She would allow the children to carry her around without a murmur of protest.  It was said she never scratched a soul.  She loved educational films, and would sit quietly with the children and watch.  Patrons loved her.  As a matter of fact, one wrote a poem about her, which appeared in Cats Magazine.

As well as being social, Gardenia was a very curious cat.  When a new shipment of books or any new object would come in, she would sit on it until her curiosity was satisfied!  When the new copier came in, Gardenia went inside it, made herself comfortable and began using it as her bed at night!

Gardenia’s official cat door was the book slot in the front door.  Gardenia coming out of her “cat door” was recorded for all posterity.  The library had a film crew come in 1952 to film the branches of the library.  While filming the front door of the main branch on Jackson Street, Gardenia jumped out of the book slot!  The filmmaker decided to use the shot and it became the opening of the film!

One of the local newspapers wrote a feature article about Gardenia in 1957, complete with pictures.  It caught national attention.  Three months later, Gardenia was awarded “The Puss’n Boots Bronze Award Citation” for “…outstanding custodianship”.  Ms. Flanders displayed it proudly next to the prestigious John Cotton Dana and Modisette Awards the library had won!

Spring 1959 came and a new main library was opened on 18th Street.  It was feared that Gardenia would not take the change well.  She had never ventured more than a half block from the Jackson Street location and hated cars.  After the staff moved her and opened her cage, Gardenia explored her new kingdom and found it worthy.  Everyone breathed a sigh of relief.

As the years wore on, Gardenia went into semi-retirement.  She spent most of her days in the filing room on a white satin pillow.  She still loved the kids and would make her appearances every now and again.  Unfortunately, on June 12, 1963, Gardenia passed away from illness.  It is not known where she was buried.

All that remains of Gardenia’s memory are a few yellowed newspaper clippings, her brief image on film and her framed award which can be found in the library’s Special Collections Department.  Local Baby Boomers and those of the Greatest Generation however, will never forget the little white cat who brought such joy to library patrons in Ouachita Parish.

Genealogy librarian with 27 years experience in the library field. View all posts by ouachitaparishhistory